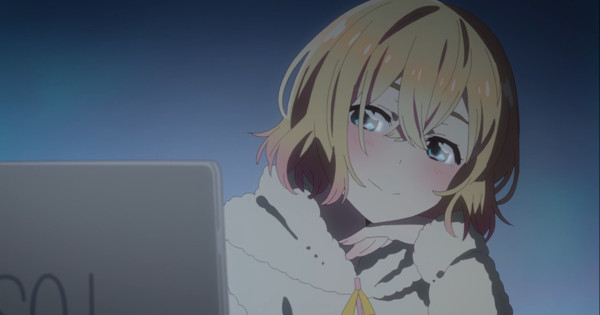 Once I saw this was going to be a Mami episode, I felt my brain tuning out. We’ve been here too many times to not know the score already. The show was going to dangle the threat of Mami finding out about Kazuya’s increasingly pathetic web of lies in front of me, insist some day she’s going to do something about it, and then yank that football out of the way just as I half-heartedly tried to kick it. And for the first 75% of this episode that’s exactly what happened, with some extra zest thrown in via Ruka getting jealous over yet another girl vying for her terrible not-boyfriend’s affections.

It’s really not worth getting into, because it’s RAG spinning its wheels in exactly the same way as before. Kazuya has two characters he doesn’t want to interact with, contrivance dictates they must anyway, mediocre shenanigans ensue as he poorly attempts to maintain the status quo. Anything I have to say about it would just be reiterating how miserable his entire dynamic with Ruka and how he keeps stringing her along without ever considering her feelings, while she thoughtlessly inserts herself into his life with no remorse. They’re terrible apart, worse together, and the fact that their last scene together is her crying while he wipes his brow at surviving a mildly awkward social situation illustrates that better than anything I could put into words.

It sucks, but it sucks in the same way this show already has for ages. So instead I want to focus on the last quarter of this episode, where we shift away from the eternal plate-spinning limbo of Kazuya’s love life, and instead follow Detective Mami as she pieces together this parade of deceptions her ex-boyfriend has inadvertently constructed.

Mami is a fascinating character to me. That’s not because she’s a well-developed or interesting personality – the exact opposite, actually. She is a total narrative blank slate, an entity who only exists to stare from the shadows with a dead-eyed snarl on her face as she plans Kazuya’s eventual doom. She has no concrete motivation, or even a coherent excuse for why she does anything she does. That means you can effectively assign whatever motives you want to her. If you’re inclined to sympathize with Kazuya, then you can paint her as a remorseless, manipulative ex who can’t be happy unless the blameless boy she heartlessly dumped is miserable. Certainly enough people did that in the first season that they turned her into the most hated villain in anime, so much so that people harassed her English voice actress for the sin of playing her. By crafting such a thin, needlessly mean and petty canvas, RAG has quite efficiently allowed its viewers to paint Mami with whatever colors they want, and many were eager to scribble swear words with their own excrement in the margins.

But if you’re not in the mood to treat Kazuya as a hapless stand-in for any guy who’s gotten dumped, then it’s way more fun to just go along with Mami. And why wouldn’t you? She’s the most active character in the whole show, and the only one genuinely interested in shaking up this convoluted construction of lies that the rest of the cast have put together. She’s the sole active force in this narrative, and by god is it fun to watch her go about it. Seeing her passive-aggressively grill Chizuru, smugly-sweet smile plastered on her face, was the most fun I’ve had with this show all season. I actually cheered when she waited for just the right moment to go full Columbo and ask Chizuru “just one more thing” at the end. It’s some of the best Heel work I’ve seen from an anime villain in ages.

And really, for as much as the show wants me to dislike Mami, she could very well be what all of these characters need – especially Kazuya. We’ve seen what everyone around him coddling and accommodating his bad ideas has accomplished, which is mostly to guilt trip girls into liking him and continuously lie to his friends and family about every aspect of his life. Who’s to say having all that torn down, and having to honestly answer for all the shit he’s pulled, wouldn’t be the push Kazuya needs to finally better himself the way he keeps saying he wants to? For all we know, Mami is the secret hero of this story, working to give her nudnik ex-boyfriend the harsh life lessons none of the other people in his life are willing to.

Not that I actually believe the show will go that route. But for a few brief minutes I was able to pretend, and for that I have to commend Mami and her unmotivated awfulness. It was a short, bright flash in the dim and dirty dumpster Rent-A-Girlfriend has become.

for the actual episode

for my imaginary Detective Mami spinoff.