Episode 6 – Call of the Night 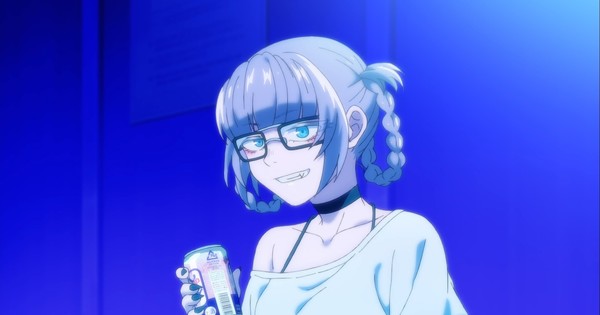 While we’ve seen Nazuna help Ko glide through many midnight firsts, his inaugural interaction with a full-fledged (and sober) human adult is rife with friction, and not only because he happens to be her masseuse at the time. Between Shirakawa unloading her office life troubles and the pool party’s grown-up vibes, Ko reckons with his youth in a major way this week. And, per usual, Call of the Night‘s earnestness guides him through these growing pains and instills enough thoughtfulness to avoid the common narrative cul-de-sacs. Plus, we get to see Nazuna in glasses. That’s super important.

Despite Nazuna’s lewd provocations last week, I commend the anime for not making Ko and Shirakawa’s massage session any more awkward than it has to be. The camerawork is downright chaste, especially compared to the scintillating angles of Nazuna’s nurse outfit from the previous episode. And that’s by design: Nazuna’s scene was basically all about teasing Ko and warming him up for a suck sesh, while Ko and Shirakawa’s scene is about two strangers opening up to each other about their anxieties and wishes. Different intentions call for differences in framing. That may seem self-evident, but lots of shows ignore these mood-based distinctions, either through deliberate ignorance or simple incompetence. While nobody can deny that Call of the Night is horny, it extolls selectively applied horniness, and that benefits all facets of the series.

As a result, the way Shirakawa and Ko open up to each other feels extremely genuine. They both put up these forced, uncomfortable fronts at first (because it’s a naturally uncomfortable situation), but as soon as they find common ground, there’s a cascade of connections and emotions. The night, again, becomes symbolic shorthand for a gathering of misfits and rejects who find comfort in each other. In Shirakawa’s case, she’s in the same situation as Ko, but aged ten years. That might not seem like a long time if you’re working on a vampiric timescale, but to regular people, there’s a frighteningly large ravine between the ages of 14 and 24. As soon as you’re out on your own, taking care of yourself, the responsibilities compound, and the calculus that goes into your every decision becomes paralyzingly complicated. You make sacrifices. You wake up miserable, and you spend the five minutes before your snooze alarm weighing the consequences of not going into work that day. You stop worrying about enjoying life, because you’re too worried about survival.

These are thoughts that have plagued me even during my relatively cozy day jobs, so imagine how manifold their intensity must be for Shirakawa, whose boss calls her into the office at 2am. What should be criminal is too often business as usual. And Ko, bless his heart, tries to save her with gallantry and an assist yeet courtesy of Nazuna. These aren’t enough to gum up the gears of society, sadly, but Ko and Nazuna’s special brand of absurdity manages to shatter Shirakawa’s gloom for the time being. Sometimes, the best we can hope for is for another person to hear and understand us, and sometimes, that can even be enough. The night, free of the sun’s blinding interference, can be clarifying in these moments.

I think Shirakawa’s brief intersection with the narrative is the best evidence yet of Call of the Night‘s greater thematic ambitions besides “vampires are cool.” We’ve spent half the season wandering without much direction, but now we have a clearer idea of what Nazuna and Ko have been wandering in opposition to. Furthermore, now we also know for sure that our aspiring vampires-in-crime don’t have all the answers. Even for Ko, becoming a vampire won’t solve all of his problems. So now, the series is prompting the audience to think about what becoming and being a vampire actually means—not literally, but symbolically. That’s not a question we have to answer right now, but it’s something to keep in mind as Call of the Night continues.

The second half is basically just a digestif with a new Nazuna outfit, and that’s valid. Ko recapitulates to his feelings of jealousy, and Nazuna again utilizes that to tease him. I appreciate that neither of them are vilified here; the show is sympathetic to Ko’s youth, and it understands that Nazuna is just having a little fun at that youth’s expense. They make up in the end, and it’s all good. Besides the focus on Nazuna’s well-defined clavicles, the most noteworthy component of this scene is hearing Creepy Nuts play animated versions of themselves as the dudes who hit on Nazuna. It’s a fun cameo, and it’s another sign of the anime doing right by the manga’s inspirations. Call of the Night has yet to be a transformative adaptation, but it’s definitely proven to be one in sync with the original and its intentions.

Call of the Night is currently streaming on
HIDIVE.

Steve’s Twitter DMs are open to vampires and vampires only. Otherwise, catch him chatting about trash and treasure alike on This Week in Anime.