Episode 6 – My Stepmom’s Daughter Is My Ex 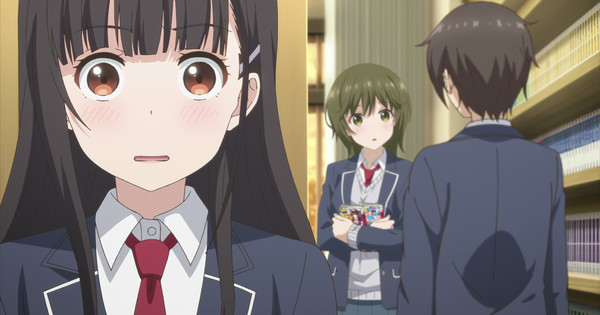 While this week’s episode can be divided into two parts, they do seem to be connected by an underlying theme. That theme is the idea of perception and comfort, with Yume and Mizuto coming to terms with the fact that despite their posturing, they just can’t get away from enjoying certain aspects of their time together. The first half of the episode focuses on Yume struggling with her perception of how her friends see her and how she wants to see Mizuto. On one hand, she takes pride in her grades, and seems to be peacocking her highschool debut by trying very hard to come off as the overly intellectual beauty that we often see in anime. (Given Yume’s penchant for light novels, I wonder if she’s taking a little too many cues from those fictional stories, which would be a little bit of a nice meta element if you consider everything) On the other hand, she wants to stay at the top of the class because she’s worried that she’ll lose all the friends and connections that she’s made so far if she doesn’t have that, but she also doesn’t want Mizuto to just give her the win. There’s an interesting internal struggle going on there because she never really makes it clear that she wants to win on her own merits; rather, she takes more issue with the fact that him being courteous and looking out for her isn’t something that she thinks he would do. I like the fact that he talked back to her by saying that it’s not up to her to decide what he does, and the frustration is justified when you consider the fact that he was putting her first in that situation. I do think the show could have been clearer about why Yume seems to have such an interest in the specific aspects of Mizuto’s personality that make him come off as unlikable, like his overly aloof and disinterested persona. It feels like the moments where she was caught off guard or reminded her of why she liked him in the first place are the moments where he breaks that character, but maybe I’m missing something or something just isn’t translating super well here. The ending is a little too neat, but I’m not really sure how else you could go about doing it.

The second half is a bit more interesting, with the introduction of a new character who seems to be that inevitable third wheel that would potentially stir up the status quo between our two leads. Last episode established that the two are kind of stuck in a lose-lose situation where they are forced to constantly interact with their ex, but that same situation also makes it near impossible for them to reconnect on a deeper level. So what happens when you introduce somebody else who might start displaying feelings for one of them? I like Yume’s internal struggle here more; it’s very clear that she doesn’t want to be jealous both as a step-sibling and as an ex, but it makes sense that she cannot help herself feeling that way. That she would try to overcompensate by being more distant yet friendly is also believable, but now we have Mizuto turning around and getting caught in his own hypocrisy by not being satisfied with those actions as courteous as they may be. This half also wraps up a little bit too neatly for my liking even if there is more left open compared to the first half with the implied romantic interest still left on the table. Overall, this week’s entry is definitely not as strong as last week’s episode, but it’s still a solid addition that properly highlights the frustration in character dynamics and expectations between these two.

My Stepmom’s Daughter Is My Ex is currently streaming on
Crunchyroll.